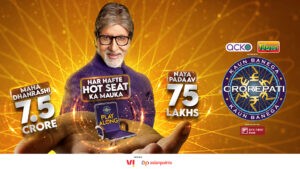 Kaun Banega Crorepati (also simply known as KBC) is an Indian Hindi-language television game show. It is the official Hindi adaptation of the Who Wants to Be a Millionaire? franchise. It has been presented by actor Amitabh Bachchan since its inception, except for during the third season, which was presented by actor Shah Rukh Khan. Due to 75th Anniversary of Indian Independence, the amount of 7 Crore is increased to 7.5 Crore & a third phase introduced before 1 Crore of ₹75 Lakh. This season every Friday there will be contestants selected from SonyLIV Play Along.