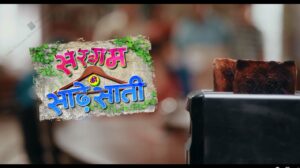 Sargam Ke Sade Sati is sequel to Optimystix Entertainment’s popular show Saas Bina Sasural that aired on Sony TV. TV actress Anjali Tatrari who was last seen as Nia in Sony TV’s Mere Dad Ki Dulhan has been roped into play the lead role in this show. Kunal Saluja who has been a successful TV presenter, and a VJ at ZOOM TV will be playing the male lead role opposite Anjali.