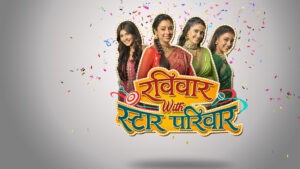 Ravivaar With Star Parivaar is an Indian television game show which premiered on 12 June 2022 on StarPlus and streamed digitally on Disney+ Hotstar. The series is hosted by Arjun Bijlani and Amaal Mallik, and features the various StarPlus television series casts competing in a music competition.